I’m away from home again. My hotel is right across from a big park. Perfect for trying Freeletics Running, I thought to myself.

So I set off yesterday for my first run. Now, I don’t really run. I get out of breath very quickly. It just doesn’t really suit me.

But actually, my first run seemed pretty easy. I did ‘Bastet’. It basically goes:

It was quite straightforward. However, I got to the final 200m and my phone died. Sometimes I hate iPhones. I left the hotel with 50% battery. In my rest parts, when I was walking through the park I browsed the internet – nothing massive. By the time I was half way through I was at 33% and then it just shut off. Grr. So I didn’t actually finish the run.

I did notice that I didn’t get that horrible sick feeling I usually get when I run – I think it’s because I took it at a sensible pace and the rests were spaced about right. Also it was a great head-clearer, and the fresh air was good… maybe I’m being converted (pah, after 1 run!)

Going to give it another go tomorrow morning. In the meantime, I’ve been swimming in the pool every morning, which feels good.

Last night I did something I never usually do. I trained. Sunday nights are usually for movies, a roast, a bath, book and early bed.

But last night I had an early dinner and I’d had a fairly lazy day. I needed to exert some energy. So I pulled on my shorts and go to it. Incidentally the ‘small’ training shorts I bought when I started Freeletics are now considerably less baggy than they used to be. Seems all those squats do make a difference.

And I was glad I worked out. It took less than half an hour and then I slept like a baby.

Pretty straightforward. Felt like a warm up, and certainly raised my pulse.

Thought this would be easy, but either I was out of practice or was tired. The push-ups were really hard. I wanted to do it under 10 minutes, but only managed 12:15.

Then I stretched and had a bath. And felt like I’d got a head start on the week. Will definitely be doing that again.

Here’s where I am versus week 1 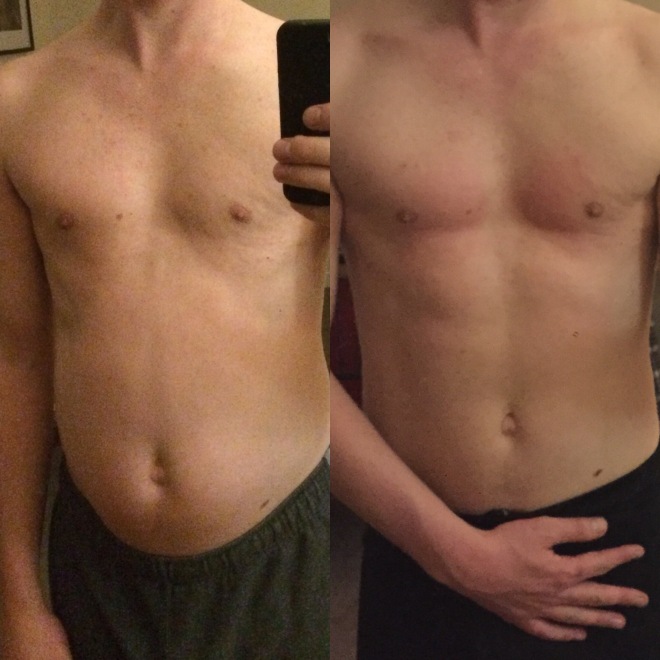 I’ve always been a skinny guy. I have a fast metabolism, and have always been fairly active. I cycle to work and always have lots of energy.
When I started Freeletics, it was because I was developing a beer belly. My waist hasn’t increased, but my belly has!

So for ages I’ve been selecting Strength Coach, in order to build muscle. But recently I switched to Strength & Cardio so that I could shift a bit more of that belly fat, and to mix things up a bit. And I’m quite enjoying it. I’m also going to start doing Freeletics Running this week (hopefully!), as I find running really hard and can’t really do any distance.

So I’ll keep you posted on that.

What Coach do you use, and why?

It’s May, and summer is around the corner. Time to put some effort in for that summer body. Even though I kind of object to that term. But still. It’d be nice to look good on the beach.

I’ve had a bit of a break – no reason apart from laziness. Too many nights going for post-work drinks, which not only means I don’t exercise in the evening (and am more likely to eat pasta for dinner!), it means I’m also less likely to get up early with a clear head after a good night’s sleep and head to the park.

I know that alcohol is the single biggest reason I don’t exercise. If I drink (even one or two drinks), my sleep isn’t good quality, I wake up groggy and I end up drinking tea in bed and scrolling through the internet on my phone for too long.

My challenge is that I work with my friends, and my job involves a lot of socialising in the evening. Most nights of the week, someone is bound to suggest going to the pub after we finish at the office, or there’ll be some event or other. It’s also much more difficult when the sun’s out.

So I’ve been trying to be really strict with myself. I try to decline, or make plans after work that don’t involve drinking. And where possible, I exercise in the morning, so that at least I’ve got it out of the way first thing. That feels so good.

But Coach 2.0 is really helping. The workouts are shorter, but no less taxing. I’m much more likely to haul myself out of bed in the morning and do a Freeletics session if I know that the whole thing isn’t going to take longer than 30 minutes, including warm-up and stretching. I really like knowing what part of my body is being exercised each day. And it all feels more efficient and clean.

Overall I’ve noticed more people refer to me as being in really good physical shape. I know my body looks more in proportion, that I have more stamina and commitment in lots of different areas. Freeletics works.

I’m going to start taking progress photos more regularly. Every week. Here’s where I am versus week 1, which is now over a year ago.

Is May too late to think about your summer body?!